On the eve of the annual January World Health Organization Executive Board meeting, an alliance of pharmaceutical industries launched its first report on efforts made to curb antimicrobial resistance. The alliance also organised a conference on the report and on challenges of antimicrobial resistance, in particular the need for research and development incentives so that the industry can continue its efforts sustainably. Some light was also shed on the need to support access to diagnostics, and lower their prices.

The AMR Industry Alliance and SustainAbility, a think tank which authored the first report on the alliance jointly organised a conference yesterday on industry action to fight against antimicrobial resistance (AMR). The report also was issued yesterday (IPW, Public Health, 18 January 2018).

Some 700,000 people are dying each year from antimicrobial resistance, said Thomas Cueni, director general of the International Federation of Pharmaceutical Manufacturers Association (IFPMA) and chair of the alliance. Those people die, in Geneva, New York, London, or in developing countries, and the count is rising, he said.

One of the challenges of AMR is there is no viable economic case to invest in research and development (R&D), he said. The US$2billion invested in 2016 by some AMR Industry Alliance members, which is an “extremely conservative estimate,” is not enough, but four times larger than what governments invest into push incentive for AMR R&D, he said. He added that US$2 billion “is a drop in the ocean in terms of what we need.”

The industry R&D investment is fragile and companies have said they might have to cut back their investment unless some sustainable new financial incentive is available, he warned.

The report says that the alliance members see little progress on pull incentives, such as market entry rewards, transferable exclusivity, and improved post-market valuation, as well as reimbursement reforms.

He also called for more companies to join the alliance, in particular Indian and Chinese companies, and said it is time “to move from call to action and from talk to action.”

Marc Sprenger, director of the World Health Organization secretariat for antimicrobial resistance, complimented the report but said it could be more transparent, and for example include results per company. He underlined the low rate of return in completing the survey on which the report is based, in particular by small and medium-sized enterprises.

The global analysis revealed that on 42 new therapeutic entities were developed, and only 12 of them targeted the four gram-negative pathogens at the top of the priority list, with only one being classified as innovative, he said.

It is important to develop new antibiotics but a way has to be found so that industry can make sure that new drugs developed can be accessible and affordable, said Sprenger. He also underlined the importance of handling the waste management of its products, so to limit the effects on the environment.

A balance between innovation, access and conservation is needed to contain AMR, he said, and noted that during the WHO November awareness week on AMR, 130 countries developed a national campaign, representing a 60 percent increase compared to the year before.

Martha Gyansa-Lutterodt, director of Pharmaceutical Services and Chief Pharmacist of Ghana, explained how the country came up with a AMR policy, involving a number of stakeholders in the discussion through a National Platform on Antimicrobial Resistance (NPAR).

The AMR Industry Alliance represents about 40 percent of the global volume of antibiotics, said Denise Delaney, London director of SustainAbility, the think tank which authored the report.

According to Delaney, 75 percent of the responding companies have a formal access strategy, policy or plan covering some or all products. This access strategy includes broad global registrations including in low and middle-income countries, and affordability taking into account countries’ income level.

She said the next report will be issued in 2020.

Incentives Needed, Both Push and Pull

Sanjay Kakkar, CEO of Peptilogics, Inc, said the biotech industry is where most innovations are found for new therapeutic agents. Biotech industries are mostly start ups and spin offs, often from university labs and they need both venture capital and big pharmaceutical companies to take their invention to market, he said. Pull incentives would justify the venture capitalists and big pharma interest, he added.

Bruce Altevogt, senior director of science policy and science advocacy for Pfizer, also underlined the fragility of the current industry investment. On affordability, and answering a question on intellectual property, he said 95 percent of antibiotics are generics, and access is more related to health infrastructures than a pricing issue. Cueni said patents are crucial “if you want the private sector to invest.”

Manica Balasegaram, director of the Global Antibiotic Research & Development (GARDP), an initiative of the WHO and the Drugs for Neglected Diseases initiative (DNDi), said some of the biggest challenges include the lack of investment for R&D push and pull incentives, and access and stewardship. He remarked that those two challenges are not necessarily in tension.

Susana Goncalves from Sandoz, representing the generics industry, said the fluctuation in demand caused by the procurement mechanism makes it difficult to forecast production, which leads to shortages. The capacity to forecast has to increase, she said, adding that all therapeutic options should be available, both new and old antibiotics.

Cueni said that none of the incentives that the industry is asking is linking sales with incentives, he said. “We really need to get a different model here,” he said. “The industry really has come a long way since 20 years ago when I am sure that many of our sales reps [representatives] were antibiotic pushers,” Cueni said, adding that today many of the sales representatives are asked to make sure that antibiotics are used less rather than more.

Diagnostics, the “Cinderella” of Discussions

Gary M. Cohen, executive vice president, Global Health and President of the BD Foundation, said diagnostics are “the Cinderella” in the AMR global discussions, often overlooked. However, he said, diagnostics are essential in curbing AMR as they enable which medicines have to be used, limiting the overuse of antibiotics and efficiently targeting resistant strains.

Catharina Boehme, CEO of the Foundation for Innovative New Diagnostics (FIND), pleaded the case of diagnostics and said the issue of the lack of diagnostics was most acute in developing countries. R&D is not enough, she said, as the access pathway for products is not defined. There is no procurement mechanism for diagnostics, such as Gavi, the Vaccine Alliance, or the Global Fund to Fight AIDS, Tuberculosis and Malaria, which would decrease the price of diagnostics.

She deplored the lack of collaboration in the diagnostics space and said diagnostics are manufactured by unregulated private sector companies in many countries. She called for a diagnostic use accelerator, which would be a way to engage industry, and in particular the pharmaceutical industry. 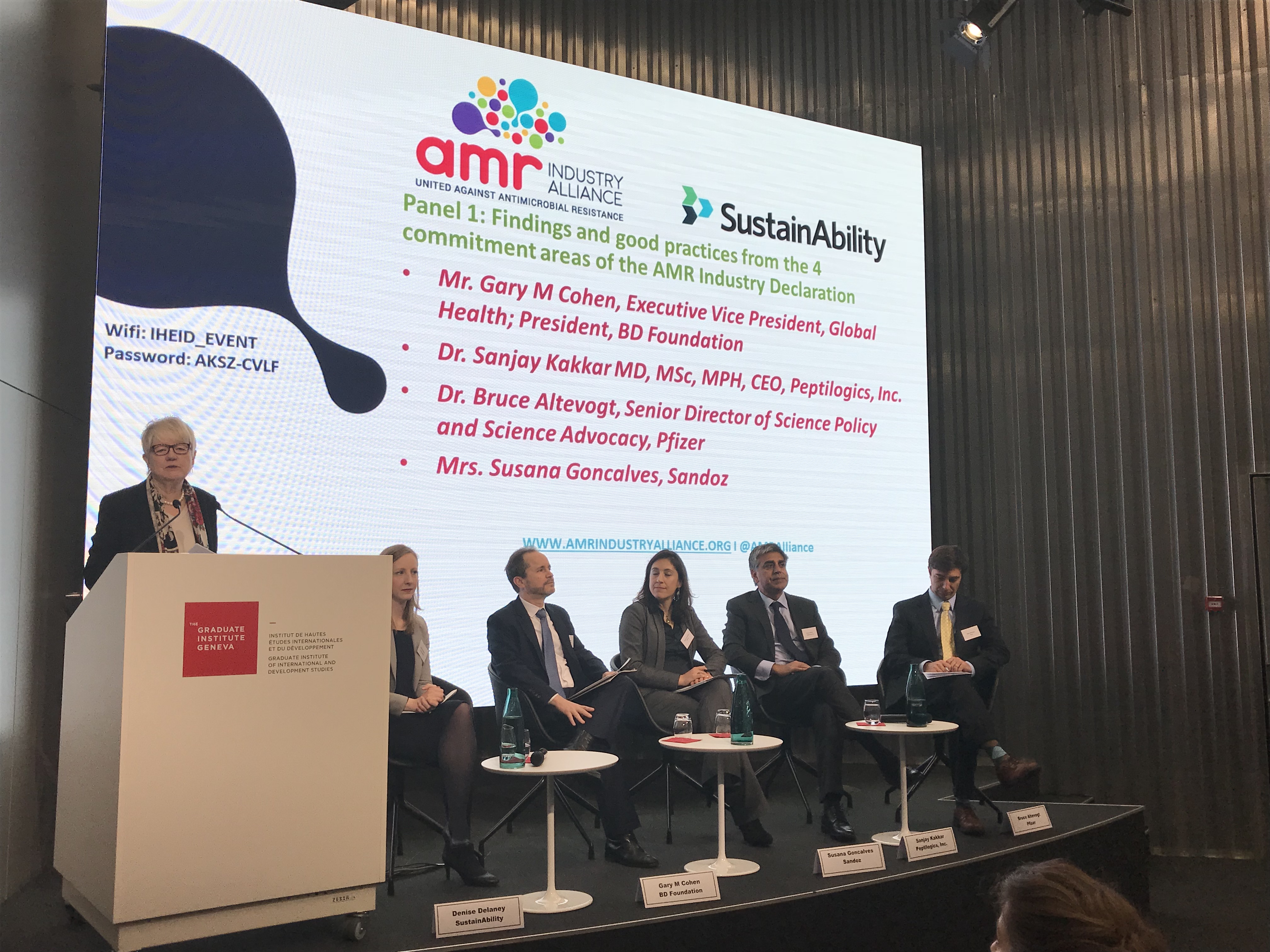