A timely reality check on silent pandemic of antimicrobial resistance

The scale and threat of antimicrobial resistance is much bigger and more imminent than previously anticipated. New evidence shows that, in 2019, the global burden associated with drug-resistant infections was an estimated 4.95 million deaths, of which AMR was the direct cause of at least 1.27 million deaths. This number is only set to grow further, unless action is taken. The direction of travel is not downwards, with COVID-19 further fuelling the issue of AMR, leaving us on the course of 10 million deaths per year by 2050.

The peer-reviewed data has been published in The Lancet and has been led by the Institute of Health Metrics and Evaluation (IHME). 4 years, 471 million individual records or isolates, and 7585 study-location-years’ worth of data have led to the most comprehensive analysis of the burden of AMR ever undertaken.

The report has today underlined the urgency of collective efforts to implement clear solutions that enable the discovery and support the market launch of new tools addressing pathogens prioritized by leading public health bodies. Attention must also be turned to the number of deaths attributable to a lack of access to antibiotics, as the majority of the world’s annual 5.7 million antibiotic-treatable deaths occur in low- and middle-income countries.

The Life Science industry have been active in tackling AMR since 2016. The industry is committed to developing the new antibiotics needed to treat resistant infections and is seeking appropriate economic incentives from Governments to support R&D. The AMR Industry Alliance, the largest industry wide group representing generics, biotech, diagnostics and innovative companies has been tracking their efforts to stem AMR since 2018. The AMR Action Fund, the largest private-public investment fund supported by EIB, Wellcome Trust and 23 biopharma companies has as its target to develop 2 to 4 new antibiotics by 2030. The International Federation of Pharmaceutical Manufacturers and Associations (IFPMA) has been the driving force behind these two pioneering initiatives, as well as supporting evidence generation on how the 11 largest global economies rank to in their efforts to tackle AMR.

The report was met with urgency from representatives of these organizations.

Thomas Cueni, Director-General of the International Federation of Pharmaceutical Manufacturers and Associations, said:

“We’ve known antimicrobial resistance is an existential threat, but we have now a clearer understanding of the toll it takes on people’s lives and on already-burdened health systems. Left unchecked, AMR could undermine the foundation of modern medicine. The R&D biopharmaceutical industry has been stepping up to the plate to propose a suite of solutions that would ensure new antibiotics reach patients, whilst preserving the effectiveness of existing tools. But this is a challenge we cannot solve on our own. This is a wake-up call for us all, industry has been a first mover in finding solutions. Now the focus has shifted to governments who must deliver new economic incentives, pragmatic antibiotic value assessments, and reimbursement reforms to enable access, that are needed to meet the needs of patients of today and tomorrow.”

“These figures are unfortunately not surprising but are most unsettling. Experts have been sounding the alarm on AMR for years, and millions of patients have died—and will continue to die—from infections for which we don’t have effective treatments. The consequence of inaction is abundantly clear. We urgently need changes to the antibiotic marketplace that incentivize scientists, entrepreneurs, and investors to advance the next generation of antibiotics so that clinicians around the world can have the tools they need to fight the growing threat of AMR.”

The AMR Industry Alliance, through its secretariat, said:

“The new IHME data is powerful and eye-opening, as they showcase that AMR has now been propelled to a leading cause of death worldwide. The upcoming release of our AMR Industry Alliance Progress Report demonstrates the ways in which the private sector is committed to advancing access to quality antibiotics, appropriate use and stewardship, responsible manufacturing, and more effective incentives to advance research and science in the fight against AMR. But we cannot tackle AMR unless governments also prioritize it as a major health and economic threat. AMR is a fast-moving train very soon to speed out of control absent a new multi-stakeholder and global movement to increase awareness and action on AMR.” 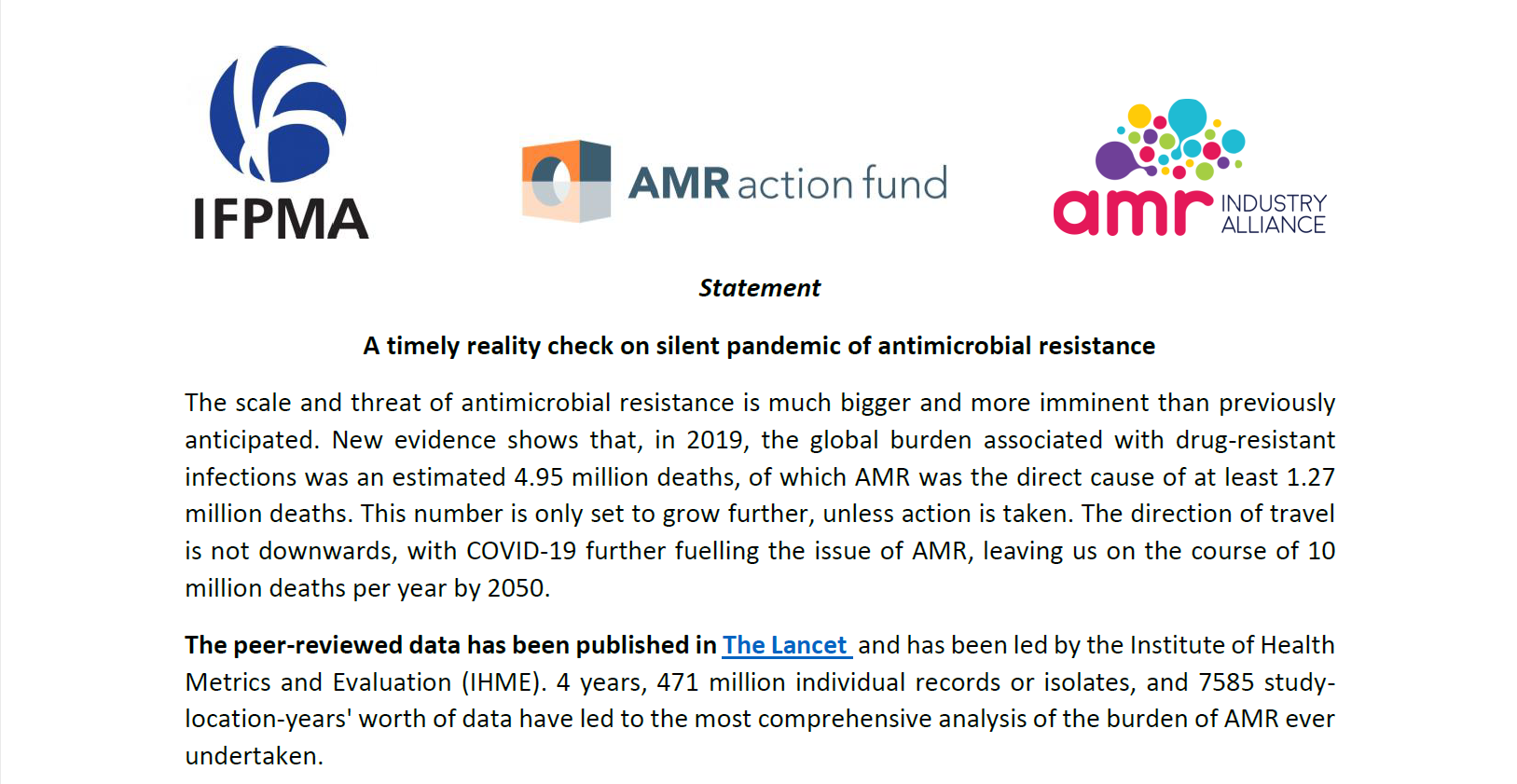