An international association of pharmaceutical, biotechnology, and diagnostics companies today announced the formation of a new alliance to monitor and drive industry efforts to fight antimicrobial resistance (AMR).

The AMR Industry Alliance aims to bring together stakeholders from the life sciences industry to ensure progress is made on their commitments to reduce the development of antimicrobial resistance, invest in research and development, and improve global access to antimicrobials, diagnostic tests, and vaccines. The launch of the alliance was announced by Thomas Cueni, director-general of the International Federation of Pharmaceutical Manufacturers & Associations (IFPMA), at the start of today’s B20 Health Conference in Berlin.

“The AMR Industry Alliance will create a broad industry momentum and facilitate the collaboration between the public and private sectors,” Cueni said in an IFPMA press release. “Only by working together can we strive for real change.”

According to the press release, one of the initial objectives of the group will be develop a framework and create a reporting mechanism to track how the industry is delivering on recent public commitments it’s made to fight AMR. The alliance will also create an advisory group to identify gaps and inform the industry on actions it can take to meet those commitments.

In January 2016, more than 100 companies and trade associations representing the pharmaceutical, biotechnology, and diagnostics industries signed on to a declaration on AMR at the World Economic Forum in Davos. The companies said they were committed to investing in the development of new antibiotics, diagnostics, and vaccines and were ready to work with policymakers to create new economic models that reflect the value of these products and the investments required.

In September 2016, ahead of the United Nations (UN) General Assembly High-Level Meeting on AMR, 13 pharmaceutical companies presented a roadmap with four key commitments to reduce drug resistance and improve access to antibiotics, diagnostics, and vaccines. The companies aim to meet those commitments by 2020.

As infections and deaths from drug-resistant bacteria have risen in recent years, AMR has emerged as a major focus of global health. The Review on Antimicrobial Resistance, a 2014 report by British economist Lord Jim O’Neill and the Wellcome Trust, estimates that if AMR is not addressed by all stakeholders, drug-resistant pathogens could cause 10 million deaths a year by 2050.

The lack of new antimicrobials to fight drug-resistant infections is a key challenge. Because new antibiotics don’t produce the same type of financial return as drugs for chronic conditions, many policy makers and industry leaders believe new financial models—including some level of assistance from the public sector—are needed to incentivize pharmaceutical companies to invest in antibiotic research and development. The O’Neill report, for example, called for the creation of a $40 billion global fund to spur research into new antibiotics and alternative therapies.

B20 paper lists AMR as a priority

In other AMR-related news from today’s B20 Health Conference, a meeting of healthcare industry leaders from the G20 nations, called the B20 Health Initiative, published its final policy paper, which featured five health recommendations to be presented to G20 health ministers. Second on the list was combatting AMR, including multidrug-resistant tuberculosis.

The paper called on G20 members to:

In an interview with Reuters ahead of tomorrow’s meeting of G20 health ministers in Berlin, German Health Minister Hermann Groehe warned that unless nations cooperate on the AMR threat and find new ways to finance development of new antibiotics, the world could face a return to an era when common bacterial infections could be deadly.

“There must be no return to the pre-penicillin era,” Groehe said. 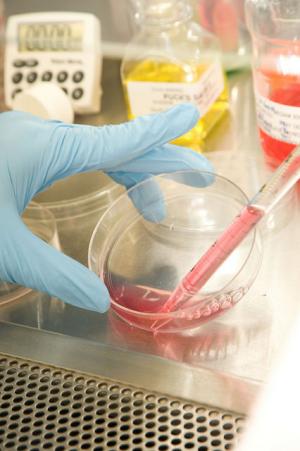